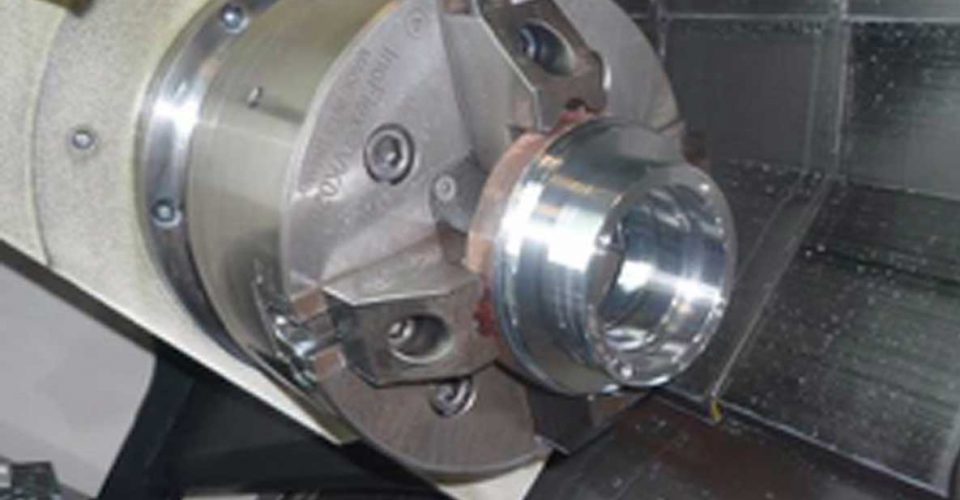 Traditional chucks soon face their limits given irregularities or asymmetrical shapes. Whilst traditional 3-jaw chucks are only seldom suited for clamping angular structures, non-compensating 4-jaw chucks are disadvantaged by static over-determination – not all jaws fit. As a result, the parts to be machined cannot be centrically clamped. The high clamping pressure of 2 and 3-jaw chucks produces large CONCENTRICITY deviations with thin-walled components – as is also the case with STÖBER ANTRIEBSTECHNIK GmbH & Co. KG. For this reason, the electronic, motor and gear manufacturer informed itself regarding alternatives to the existing clamping technologies in early 2016. Its attention was drawn to the [InoFlex] chuck from HWR Spannmittel GmbH: a 4-jaw chuck with compensating centric clamping. This means that each of the jaws lying diametrically opposite come up to the workpiece in pairs. This ensures that both components are centrically clamped and that all jaws grip – and that with the same gripping power. As the workpiece shape is of no consequence here, there is no need for the parameters to be adjusted for different castings. Extending the number of clamping points from three to four also significantly improved the CONCENTRICITY. This enabled Stöber to raise product quality at the same time as shortening the set-up and clamping times.

Gears, motors and geared engines have been made at the HQ of Stöber Antriebstechnik GmbH & Co. KG in Pforzheim for many decades now. To this end, various cast blanks are turned and milled in Mechanical Manufacturing directly on the site. However, at the beginning of 2016 the company realized there was an optimisation potential in lathing work. “Up to last year we used traditional 2 and 3-jaw chucks for turning cast and forged blanks”, this is how Volker Manz, Head of Production at Stöber Antriebstechnik GmbH & Co. KG, describes the position at the outset. “The drawback was that they had to be re-set following a nest change due to certain differences between the cast batches.” This resulted in a marked lengthening of the machining time per batch. In addition, and particularly with asymmetrical and thin-walled blanks, there was often the problem of the jaws not gripping properly. Consequently, excessive clamping pressure had to be set for fail-safe clamping. “This caused deformations and, in turn, CONCENTRICITY deviations”, continued Mr. Manz.

“My colleagues from Central Technology Planning became aware of HWR Spanntechnik’s [InoFlex] from reading trade journals at the beginning of last year and reported this to me”, explains Mr. Manz. “We thought the concept was convincing and wanted to test it in use.” As a result, Stöber contacted HWR. Following a presentation in Pforzheim and intensive consultations, chucks were constructed on the basis of a workpiece drawing. Following delivery, Stöber tested [InoFlex] as to its merits. “We monitored the test series for the first two days”, remarked Peter Pott, Sales staff member responsible at HWR Spanntechnik GmbH. [InoFlex] complied with Stöber’s expectations displaying, in particular, flexibility and only minor deformation. In contrast to traditional chucks for lathes, [InoFlex] is equipped with four chucks. They ensure not only better fixing – irrespective of the shape of the workpieces – but also a far less marked polygon formation.

“We gave ourselves the assignment in 2010 of devising a clamp that grips both the circular and cubic geometries and the asymmetrical parts”, recalls Volker Henke, Managing Director at HWR. “Our aim was also to optimise the gripping power, rotational speed, overall height and weight in order for them to be compared with a commercially available 3-jaw chuck.” Only with four jaws was an adjustment to all shapes possible, although the problem of a physical over-determination still remained. When all chucks move evenly to a centre, no force can be exercised at a point. The only solution forthcoming was from the compensating clamping technology by which both jaw pairs can rest independently of each other – yet centrically – against the workpiece.

REDUCTION DOWN TO JUST NINE COMPONENTS.

As the first [InoFlex] prototypes comprised 60 components, the need for further optimisation was clear. The result is one of just nine parts. The two diametrically opposed jaw pairs are driven by a link gear. With the help of this reduction in components and thus of abrasion, the patented [InoFlex] can certainly hold its own against 3-jaw chucks. The [InoFlex] VK031 deployed at Stöber, a closed power chuck, has a 9.6 mm lift, a maximum 182 kN gripping power and a rotational speed of 2800 per minute. Even gripping powers up to 230 kN are possible with other models.

Thanks to the flexible mounting, [InoFlex] can be fitted in lathes, milling machines and in combined machines. “An important point for us was the possibility of using it in various machines”, confirms Mr. Manz. “Various jaw shapes should also be fittable.” Thanks to extending the number from three to four jaws, clearly reduced deformation and a high true running precision were also obtained. Re-run precision was also improved. “Very close tolerances can be obtained with four clamping points”, explains Mr. Henke.

There was a marked rise in quality of the Stöber final products due to only a slight deformation in clamping the workpieces and the centric clamping achieved even with asymmetrical blanks. “In particular, shape precision in the bearing seat is now clearly greater – it is around 6 μm and above”, remarks Manz von Stöber. Furthermore, differences between the blanks no longer play a role and parametrisations when changing the cast nests are unnecessary. This has allowed the entire process to be optimised from operation through process reliability up to the final result.

No problems at all have arisen so far. To ensure a long service life, HWR pays attention to high-grade and well-finished materials. All parts are hardened and then hard-machined or grounded. In addition, all clamping devices are FEM-calculated and thus are non-fatigue-critical. “We also test all our clamping devices for fatigue strength on our own test bench”, continues Mr. Henke. Stöber is also convinced of the top quality involved. In the meantime, two [InoFlex] are now in operation in the company’s mechanical manufacturing section and a quote for a third model has already been drafted.